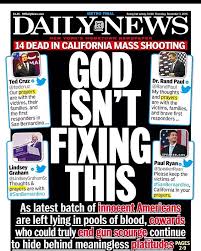 “For we wrestle not against flesh and blood, but against principalities, against powers, against the rulers of the darkness of this age, against spiritual hosts of wickedness in high places” Ephesians 6:12

Frustrated by the rise in terrorism and the latest mass shooting in California, the New York Daily News shocked the nation on December 3 with this headline, “GodIsn’tFixing This“.

Strange when you think about it as God has not been welcome in the public and private lives of most Americans for the better part of the last thirty years or so and now, we have the audacity to complain that God is not fixing this?

Crazy, I know. And as strange as that may be, even stranger is the accompanying article by Rich Shapiro which begins with this statement- “prayers aren’t working”.   (You can read his article here).

According to Shapiro, he is growing weary of politicians (particularly, the…